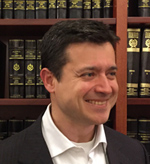 Dr. Grigoris Lazarakos is a lawyer admitted at the Athens Bar Association since October 1996, entitled to attend cases at Supreme Court (Areios Pagos). Since October 2007, he has been practicing law in cooperation with A. Sarivalassis, Sp. Ghikas and I. Stavropoulos. He served as a substitute Member of the Board of Directors of the Hellenic Data Protection Authority from March 2008 to August 2016.

He has published 3 books as well as 24 scientific publications mainly in the field of data protection and public – administrative law. He has also participated as a Lecturer in more than (twenty) 20 scientific conferences in similar fields.

He lectured for six (6) academic semesters “Business and Communication Law” at Athens University of Economics and Business, Department of Marketing and Communication and for two (2) academic semesters “Constitutional Law” at University of Peloponese, Department of Political Science and International Relations. He speaks fluently German and English.

04 Medical Negligence  Both in the context of civil and criminal litigation, supporting our clients (mainly patients) against doctors and hospitals in cases of malpractice.
Read More

05 Civil LawProviding legal advice on questions on civil law and representing our clients before the courts of First Instance, Courts of Appeal and the Supreme Court.
Read More